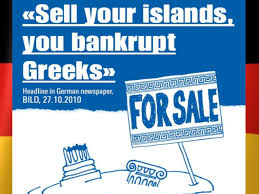 The Biggest Government Default In The History Of The World Occured Today When The International Swaps & Derivatives Association (ISDA) Declared Greece To Be In Default (Technical Bankruptcy), Triggering 4323 Credit Default Swaps (these can be likened to insurance claims by Holders Of Greek Bonds, though anyone could buy CDS as a bet that Greece will default). ‘ISDA EMEA Determinations Committee: Restructuring Credit Event Has Occurred with Respect to The Hellenic Republic’.

U.S. and European Banks which issued the credit default swaps on Greek Government debt will now be hit with claims in the billions of dollars.

This is the 6th time in modern Greek history (less than 200 years) that the country has defaulted on its government debt. The economic situation of Greeks will dramatically and steadily deteriorate from now on until serious and deep reforms take place and the country learns to live within its means, or to be honest, the crisis will last until German companies manage to buy most of the significant infrastructure of Greece, after all why would EU banks extend so much credit to Greece and Greek households knowing that they could never be repaid ? not with the meagre income of Greek household or the negative trade balance of the Greek state, clearly they expected and worked for a fire sale of Greek infrastructure to cover the bill , typical predatory imperialist finance.

Presently the Greek Government spends more than it collects in taxes, whilst there is no convincing political will to restructure and the country’s social and political system can be likened to a mafia that can only survive parasitically.

Our opinion is that Greek Public Sector does not know how to work without bribery, and cartels of lawyers, judges, public employees and mafiosi, and those of workers aka trade unions, many with media interests and all with substantial political leverage only knowhow to work by taking advantage of public finances and public governance mismanagement, all these powerful groups will staunchly oppose any reforms other than cosmetic and temporary ones.

Efforts to lower the massive Greek household debt by forgiving part of it will simply encourage irresponsibility and further corrupt practices, while employment terms worsen and unemployment increases.

We just do not see a way for Greece to progress without an official bankruptcy, and without serious and radical restructuring of government into an open and lightweight structure.

There are reports that billions of Euros have been taken out of Greece by tax evaders and invested to a large degree into London real estate, this money rightfully belongs to the many US, British & other Banks that will pay out Greek CDS and the German govt. but as explained there is no such interest, Germany wants Greek infrastructure on the cheap instead and nothing will be done against the tax evaders.

We at Cohila.com expect a monumental crisis to ensue as the Banks issuing the CDS were leveraged at around 25: 1, and the $4+ billion claims that we estimate are going to hit them will mean a system de-leveraging of at least $100 billion.

There seems to be a strange calm in the markets, preceding and following the ISDA announcement, uncharted territory waiting for a catalyst? or everyone knows what the trick is here.

Cash has being injected into European banks with 0% interest in expectation of the Greek default, what a surprise!

The ECB exempted itself from the 75% haircut forced on private Greek bond holders, this can be seen as an ‘extortion racket’ perpetrated by the ECB (European Community Bank) and the Greek Government, who colluded to make some (the private) creditors the victims.

We expect massive Lawsuits by hedge funds and banks against Greece and the ECB to ensue.