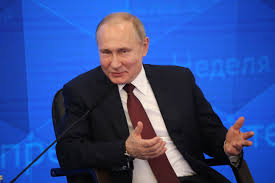 Crimea and Russia, The Matryoshka doll

Political and economic Power in Russia (and Ukraine to a lesser degree) is mainly in the hands of a semi-mafia elite known as ‘oligarchs’, the chairman of the Oligarch’s club is also the President of the country.

It is the financial and military Oligarchs money, thugs, and influence that effectively elect the president of the Russian Republic.

That is not to say the president is powerless, on the contrary as a person of trust he has the support of the Oligarchs and the power to banish any of them not playing by the games of the ‘club’, for an easy example look at Mikhail Khodorkovsky.

The president is in charge of the country’s army and a substantial bureaucratic apparatus, he has to be different than the rest of the Oligarchs in that as a figure of unity he has to be a bit of a patriot (motivated by a different kind of greed) but also financial patron , Putin was viewed as a suitable candidate by both the KGB Military Oligarchs and the strictly financial Oligarchs.

The financial Oligarchs have a substantial bureaucratic setup and an army of ‘criminal’ thugs well entrenched into the community this includes the civil servic , as you can see this is the neo-Feudal system governing the Russian neo-Serfs, a more extreme version of what happens in the EU and UK.

The west under the leadership of the German government wanted to pull Ukraine into the sphere of the EEC project, understanding the political dynamics of Ukraine they turned to the biggest Ukrainian Oligarch Dmytro Firtash and struck a deal he could hardly refuse, tired of being in Russian Oligarchs pocket and feeding off crumbs he decided to align with Europe.

Putin wanted the Ukraine to be in the Russian sphere of influence, he used his Oligarchs and their strong connections in Ukraine to achieve this goal, it is important here to say that Ukrainian (mafioso) Oligarchs are a subsidiary of the larger Russian Oligarchs, additionally Putin used financial incentives like loans to Ukraine and cheaper gas.

What happened is widely known but in brief the president of Ukraine gave in to the Oligarchs and yielded to Russia but Firtash’s gang and the ‘people’ revolted in Kiev and elsewhere forcing President Viktor Yanukovych to flee which was a pretext for Russian military occupation and annexation of Crimea.

What is not widely known is that the ‘people’ in Ukrainian reality are ‘owned’ by the Oligarchs and their thugs, led by Firtash they played a double role, pretending to the Russian Oligarchs that they were following Moscow’s orders while in fact they followed Berlin’s orders, thus Putin’s enraged claim that the Ukrainian protesters were Nazis (not too subtle a reference to Germany) , we can now see clearly that president Yanukovich fled Ukraine when he realised that the Oligarchs had withdrawn their ‘protection’, clearly he did not flee because unarmed protestors posed a threat, when as President would have extensive protection from Police and army (which incidentally are in the pocket of the Oligarchs like everything else)

Putin furious that the Europeans beat him in his own game used the feeble army of Russia to attack and ‘annex’ Crimea, unfortunately for him sealing his long term fate, only delayed while (cultural) civil war of sorts rages in USA.

Firtash conveniently was in Europe when all hell broke lose and was placed in protective custody under some legal pretext, the west then set off tempting or harassing Russian Oligarchs both officially and clandestinely to stop them sorting with a bullet their underling Firtash, the exercise must have been successful because Firtash was freed from ‘protective custody’ ….

A frightened and angry Putin is trying to tighten control over the Russian Oligarchs, who let him down by allowing Firtash to trick them while the west is scheming with them, the conclusion can only be one….. when the ‘leader’ of a $2 trillion country goes against advanced leaders of (combined) $31 trillion powerhouses.

In support of this ‘intelligence thesis’ I draw the readers attention to the dossier circulated by the London PR firm Bell Pottinger acting for Firtash and published by the UK publication Public Eye, the dossier says that Firtash persuaded members of the Ukrainian parliament to vote against Yanukovych after the shootings at Maidan, he then begun a dialoque with Moscow in order for Russia to accept the ‘western’ transitional phase in Ukraine.. Clearly Firtash had Ukrainian politicians in his pocket and a hotline to Putin it is also clearly that he worked for the ‘west’ ..

In this game of chess the west got Ukraine and Putin the consolation price of Crimea.