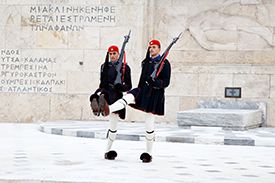 Bavarian Establishment Of The Modern Greek Army and Bureaucracy 1832


Modern Greece is a country born out of a mixture of regional ethnicities, mostly huddled under the banner of the Greek Orthodox Christian Church (often a tag of convenience for Jews in Turkey) and therefore describing themselves as ‘Greek’.
European powers including Russia, Britain, Germany, Austria-Hungary, France and Italy, desired the demise of the troublesome Ottoman Empire and supported it’s breakup into independent countries along ethnic-cultural lines, a rare instance of western European agreement, one of these newly created countries was modern Greece.

We must here understand that the liberation of Greece was a product of disparate forces, primarily bandits (κλεφτες) who for financial gain successfully undermined Ottoman rule , this mostly incidental by-product endeared them to both the fewer true Nationalists and the educated Philhellenes across Europe who then plotted with them and supported the ‘freedom’ bandits even fighting with them in later stages. The Ottomans socially suppressed and economically exploited Christians, the resulting impoverishment led many to become bandits, others were bandits by inclination.

The spoils of a ‘National’ victory against the Ottomans were undoubtedly clear to all ‘revolutionary’ bandits. Opportunists, romantics and realistic believers in higher good (religious and ethnic) joined forces.

Following the revolt against the Ottoman Turkish rule by (the Vassal administrator) Ali Pasha of Janina (now in modern Greece), Morea, Rumelia, and Thessaly also revolted in 1821, this was met with extreme cruelty by the Turks, the Greeks received no help from Europe or Russia, however numerous associations sprung up in northern Europe with the aim of helping Greece. One of those formed in Munich, the capital of Bavaria, led by the philologist and pedagogue (teacher) Thiersch.

In vain the pragmatic Metternich tried to argue with them that modern Greeks were not the Greeks of antiquity but a mixture of Greeks mixed with Albanians, slavs, and other elements, the liberal romanticists like King Ludwig of Bavaria saw in Greeks the descendants of ancient Greeks who brought human culture to its highest perfection.

In the spring of 1821 Ludwig wrote poems exhorting the Greek rebels to victory, he sent money and gifts to those fighting for Greece, later on he would get very upset that the nobles, and clergy had barely contributed funds for the liberation of Greece.

The revolts by the Greeks against the Turkish Ottoman state, looked doomed, finding only the support of romantic idealists in Europe, but luck smiled on the ‘Greeks” with the outbreak of the Russian Turkish war in April 1828, this at once occupied and weakened the Ottoman state, and made Russia an active friend of the Greek revolution.

There should be no doubt that the founding roots of the Modern Greek army was as a primarily bandit force upon which the Bavarians build a real army, the great powers of the time realised that lack of discipline and allegiance to warlords did not bode well for the longevity of the Greek independence movement and decided to send a head of state to unite the people organise the bureaucracy and create a functioning army with central command.

The consensus figure to become King Of Greece, and create the structures of an
independent Greek state, was Prince Otto, Bavarian (German) King Ludwig’s second son.

With money borrowed from the British Government and the illustrious Jewish banking family of Rothschild, an expedition of Bavarian bureaucrats and palace officials plus a
Bavarian military expedition force of 3500 men was created as the initial army of Greece, these were dispatched in 1835 to Greece together with prince Otto as the new King of Greece.

The Romantic and chivalrous King Ludwig of Bavaria ruled as Monarch of Bavaria, a German state, from 1825 to 1847, he is a figure that is important in the early stages of existence of the modern Greek state, not only for his direct contribution to Greece, but he is also an example of the pro Greek (philhellenic) attitude of the times among many of the European Liberal Aristocracy of 19th century, fuelled by awareness and appreciation of ancient Greek culture.

Count Conti paints a picture of a romantic, liberal, idealistic, art appreciative, Patriotic and sensitive man with an overriding passion for women and extra marital affairs, and a strong like of Italy. In a letter written by Ludwig in 1857 to be opened upon his death he refers to his selfish love of Greece, a country which was identified with eternal values of philosophy and art, in the psyche of European Liberal Aristocrats of the 17th century, ‘I worked for the liberation of Greece, and longed ardently for it, I had no thoughts for my house, even if no member of it ever wears the crown of Greece again, I wish it prosperity and expansion’.

In 1832 Ludwig received news, while in Panella Italy, that the major powers in the London agreement of 7th May 1832 had recognised his son Otto (aged 17) as King of Greece, Ludwig was delighted but Bavaria felt it was a heavy, risky and uncertain undertaking, without serious benefits for Bavaria other than the King Ludwig’s Grecomania.

Ludwig nominated Josef Ludwig, Graf van Armansperg (1828-1831 count Armansperg, an ex-minister) as the regent for his underage son, Otto the new king of Greece, ‘I entrust my son’s well being to you … what I place in your hands is not only something personal but in the interests of the Bavarian people and of historic significance to the world’.

The brother of the Queen of Bavaria was the commander of the Cavalry division, while the talented Bernhard von Hess (later, General and war minister ‘Kriegsminister’ of Greece) was in the 2nd battalion of the 12th Royal Bavarian Infantry regiment (Koniglich Bayerischen Infanterieregiments) which was part of the brigade sent to Greece.

In the period 1833 to 1843 Hess was with his battalion, which initially consisted mainly of Bavarian volunteers, they constantly prevented and stopped insurgencies against the government, he was promoted to lieutenant colonel (Oberstleutnant) and acted with determined efficiency, prudency, and mercifullness.

King Otto appointed him commander of his bodyguard in 1835, In 1836 he became the city of Athens commander (Stadtkommandanten von Athen), was promoted to General, appointed as the King’s Marshall, and in 1842 he became War minister.

In November 1832 the selected troops begun their march from their selective barracks to Munich, and then over the border into Tyrol, after 6 weeks marching through snow covered Tyrol they arrived in the (Italian) port Triest in the middle of December.

Two years later In December 1835 King Ludwig went to Athens, Greece, to see why the Greeks were unhappy with his son’s brief regency, it is said that the sun rose behind the Parthenon as Ludwig’s ship entered the harbour of Piraeus, shortly thereafter son and father greeted each other warmly, the greeks were delighted that a ‘real’ King was in town.

Otto was hungry for advice, Ludwig soon realised that Otto was incapable at making decisions and leading, not much could be done about it but at least projecting stability might improve things, he recommended that Otto marries and builds a palace in Athens, standard practise among aristocracy, to ensure stability and continuity, the widely perceived social function of any ruling system.

Walking in the streets of Athens Ludwig was greeted warmly by everyone, an obvious improvement to his weak son and a proven friend of Greece, no doubt, people wished he would stay in Greece.
The disorganisation and indiscipline of the Greeks combined with Otto’s inferior leadership skills made Ludwig to have some doubts on the feasibility of an independent Greece under his son.

2nd Battalion
The 2nd battalion was comprised from
the 10th and 12th Battalions of the Bavarian infantry regiments.
The battalion was under the command of
Oberstlieutenant Wilhelm Herbst, it was organized in companies of 125 men each.