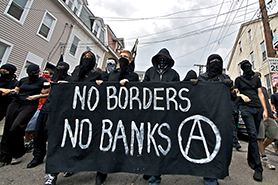 A New Dawn For Western Civilisation

Western Civilisation is reaching a tipping point, leftist politics destroyed our religion, families, cities, and countries in a bid to create universal man (melting pot), a creature devoid of race part of a unitary culture with freedom to think and read only political correctness.

The colourful world of many cultures and religions is now called racism, and a monochrome world of universal race and culture is envisaged were only the fascist socialist mono culture is allowed.

On 31st of march 2012 groups of people from various European countries assembled in Denmark to demonstrate against Muslim extremism on European soil and the influx of Moslem immigrants to Europe, the perception is that many of these harbour hostile sentiment towards Europeans, Jews and Christians.

The rally was described by much of the mass media as Islamophobic (made up term functioning as a slur) and racist (devoid of meaning, strictly a slur) these ‘offence’ tags serve the leftist government/press entities as equivalent of secular fatwas, to threaten, intimidate and silence criticism and dissent.

The catalyst for the rally was the killing of 2 French soldiers, a Rabbi and 3 young Jewish children by Mohamed Merah, an Algerian Moslem immigrant and resident of France, who died shooting at French Policemen and wounding 2 of them.

Mohamed Merah’s father later blamed France and said that he will work the rest of his life to make money and take France to court, uttering nothing about his son’s innocent victims or of using his money to compensate the families.

It seems apparent that a section of Moslems, perhaps an insidiously fast growing and large one, harbour ill feelings towards Christians, Jews, Europeans and Americans, in fact there seems to be an undeclared war underway by these Moslem extremists, while they obtain the financial and cultural benefits of immigration away from Moslem lands in America and Europe.

Here we must place a lot of the blame for Moslem disaffection on the shoulders of the socialist grievance culture for political gain that tries to persuade minority groups that they are victims.

The dominance of the destructive political left superstructure (Judges, Politicians, Academics, Press) and small army of hippie activists (licensed to hassle) funded by big business and the billionaire class of Davos man with their mindless attachment to knee-jerk relativism (old time icons of repressed peoples), mainly black people and moslems, has paralysed western societies from dealing with the very serious threat of rampant illegal immigration, culture collapse, black racial snobbism of superior claim to (eternal) compensation, a multitude of similar imagined grievances by many societal groups and National security attacks.

The biggest incitement to hatred is to ignore it happens, leftist elite is particularly prone to this social crime.

The nanny oppressive leftist state wants to force feed injustice and abuse on the populace responding with the fatwas of racism and extremism to those complaining.

A new epoch is very slowly taking shape, the totalitarian left ruling the western world will be overthrown, ushering real freedom and fairness, free speech will replace the subjective offence against political correctness, which silences criticism.