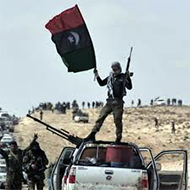 Note: This was written when Gaddafi was still in power in Libya.

Christians and Jews come to the aid of a persecuted Moslem nation, while by large Africans and some fellow Moslem Nations aid their persecutors.
You could not have imagined of such a bizarre scenario just a short while ago, yet this is the reality of Libya in April 2011.

While many are missing the importance of the momentous happenings in Libya, prominently the U.S. secretary of defence Robert Gates, there are a few others that have recognised this game changer for what it is, prominently among them Bernard-Henri Levy, the French Sephardic Jew, some like to call ‘a prophet’.

Bernard, is a philosopher, his argument is one of logical necessity not of political and economic interest unlike the Vatican’s view which appears double faced, calling for an immediate “suspension” of the use of arms when French and American forces attacked Gadaffi’s army but staying silent when Gaddafi’s army shoots at protesters.

The list of underworld figures, authoritarian regimes, and corrupt western entities having dealings with Ghadaffi is undoubtedly very big, and their influence seems far reaching, add to this the short sighted U.S. defence secretary and his bureaucracy, and the anti-western and thinly veiled fanatical Islamic government of Turkey, which despises to see Moslems owing gratitude to Christians and Jews and there you have the pro-Gaddafi bloc.

The narrative of Christianity and Judaism against Islam is smashed by the Libyan war of freedom, the narrative of the hated evil America is equally proven false, Libya will present a unique success story to the U.S. if the liberation war is handled properly.