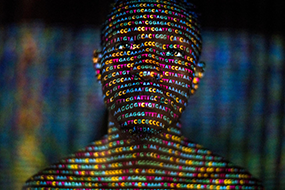 Discover Your Ancestry Through DNA Analysis

The field of genetics, through DNA analysis, has started offering up sensational new discoveries, among other about peoples ancestry for example Jewish origins, exile paths , and migrations but also can provide medical help in the diagnosis of sicknesses and likely weaknesses that may develop into sickness you can use this info to take measures to try to avoid or delay the onset of these genetic weaknesses like dementia, cancer etc.

To get suggestions of your male line history you can do a YDNA test (http://www.familytreedna.com/) the testing website explains technicalities.

As the male chromosome is passed from father to son and changes little over the generations, it is possible to trace your male line to antiquity.

This is easier with static populations than dynamic ones like the Jewish populations, luckily in my case my male DNA is both non European and rare, therefore when found in Europe even less ambiguous as the carriers of that DNA to Europe are known.

Small differences in YDNA loci help identify the period of common ancestry with other people, you then cross reference this with the family histories of these people with related male DNA to get an idea of your male ancestry or if you know your family history you can verify and possibly correct erroneous knowledge.

To get suggestions of all of your recent ancestry the appropriate test is Autosomal DNA (https://www.23andme.com/), this way you uncover relatively recent relatives up to 5th cousin.

Once you do your YDNA test don’t forget to use the data to search for dna relatives using the huge database at http://www.ysearch.org/ although the DNA testing companies have their own databases ysearch has a much bigger database.

I offer here an example of ancestry discovery through YDNA test. The Jewish male DNA tribes are part of the E and J Haplogroups (later admixtures added some other Haplogroups), here I will unveil a small Jewish clan representing around 15% of the Hebrew nation, part of the E Haplogroup defined by the V22+ mutation, it has spread to Europe mainly by Jews, my male ancestors were among these.

The natural home of this small Haplogroup is the Nile delta in Egypt ( Cruciani et al.(2007)) , from there in recent times it has spread down to Sudan and Ethiopia, The Nile has always been a conduit of commerce and wealth it is the great lifeline of Egypt, natural selection forced the people of the Nile to be creative (unpredictable nile flood) and entrepreneurial, something like the Dutch who had to live on a sort of similarly problematic environment. The speculation is that among the people of the Nile we should find the great ruling dynasties and Pharaohs of Egypt after all Luxor the ancient capital of upper Egypt is on the Nile.

The V22+ Haplogroup is rare among Europeans and a small minority among Hebrews, pointing to an admixture into the Hebrew gene pool rather than a founding Haplogroup, this mixture probably occurred when the Hebrews settled in Egypt (the land of Goshen) which is the habitat of V22. The geographical spread of V22 in Europe follow closely the Hebrew European exile paths.

V22 In Scotland And Ireland

There are people with V22 Ydna in Ireland, Scotland and the scottish border with England, clans called border ‘reivers’. Some speculate that these are of Roman ancestry, however the Romans never properly settled Ireland or Scotland, there may be some truth to this view as far as the V13 haplogroup is concerned but the V22 (including the related V12) was never heavily represented among the Romans, instead considering that Queen Anne in 1709-10 invited Germans from the Palatinates (Protestants) to come to Britain and that some of those were sent to the border areas with Scotland as a barrier to Catholic Scotland, it seems more likely that the V22+ haplogroup in the border areas are the descendants of the Germans.

These Germans were carrying Jewish male genes because Jews moved from Italy into Switzerland and Germany once there they went to live among the Protestants which were also discriminated against by the Catholics, as can be expected they mixed and assimilated.

My autosomal DNA has links with people from south Germany and the Palatinates , also YDNA links to among other the border reivers in Britain , suddenly it all becomes clear and history reveals itself through our DNA!